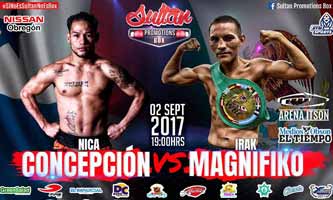 Review by AllTheBestFights.com: 2017-09-02, good fight between Luis Concepcion and Iran Diaz: it gets three stars.

The former Wba Flw and super-Flw champion Luis Concepcion entered this fight with a boxing record of 36-5-0 (25 knockouts) and he is ranked as the No.9 super flyweight in the world (currently the #1 in this division is Srisaket Sor Rungvisai). ‘El Nica’ Concepcion lost to Khalid Yafai last year (=Concepcion vs Yafai) but he came back to win against Luis de la Rosa in 2017.
His opponent, Iran Diaz, has an official record of 12-2-2 (5 knockouts) and he entered as the No.41 in the same weight class. He fought twice in 2016 losing to Nordine Oubaali and beating Hernan Marquez. Iran Diaz vs Luis Concepcion is the main event of the evening. Watch the video and rate this fight!