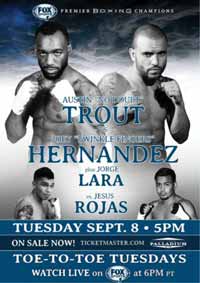 Review by AllTheBestFights.com: 2015-09-08, good finish but the rest of the fight was not so exciting: Austin Trout vs Joey Hernandez gets two stars.

The former Wba light middleweight champion Austin Trout entered this fight with a professional boxing record of 29-2-0 (16 knockouts) and he is ranked as the No.15 super welterweight in the world. He suffered two consecutive defeats in 2013, against Saul ‘Canelo’ Alvarez (=Alvarez vs Trout) and Erislandy Lara (=Lara vs Trout), but then he has won three bouts beating came back to win beating Luis Galarza in his last one.
His opponent, Joey Hernandez, has an official record of 24-3-1 (14 knockouts) and he entered as the No.59 in the same weight class but he comes off the loss against Julian Williams. Trout vs Hernandez is the main event of the evening. Watch the video and rate this fight!