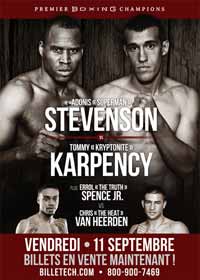 The undefeated Errol Spence Jr entered this fight with a perfect boxing record of 17-0-0 (14 KOs=82%) and he is ranked as the No.30 welterweight in the world. He has already fought twice in 2015 winning over Samuel Vargas and Phil Lo Greco (=Spence vs Lo Greco).
His opponent, Chris van Heerden, has a record of 23-1-1 (12 knockouts) and he entered as the No.25 in the same weight class. He suffered his only loss in 2010 when he faced Nikola Stevanovic (by split decision), since then he has won nine consecutive bouts beating Ramon Ayala in his last one. Spence vs van Heerden is on the undercard of Adonis Stevenson vs Tommy Karpency. Watch the video and rate this fight!