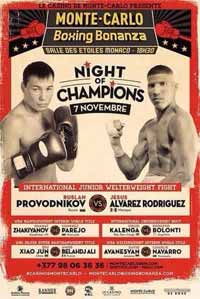 Review by AllTheBestFights.com: 2015-11-07, some good exchanges between David Avanesyan and Charlie Navarro but it is not enough to get three stars: it gets two.

David Avanesyan entered this fight with a professional record of 20-1-1 (10 knockouts) and he is ranked as the No.32 welterweight in the world. He suffered his only loss in 2009 when he faced Andrey Klimov at his second professional bout, since then he has collected 19 victories and one draw, against Aslanbek Kozaev in 2013 (=Kozaev vs Avanesyan).
His opponent, Charlie Navarro, has a record of 25-7-0 (20 KOs=80%) and he entered as the No.31 in the same weight class. He lost two consecutive bouts between 2012 and 2013, against Jorge Paez Jr and Omar Chavez (=Chavez vs Navarro), but then he has won three bouts beating Elvin Perez in his last one. Avanesyan vs Navarro is valid for the interim WBA World welterweight title; undercard of Ruslan Provodnikov vs Alvarez Rodriguez. Watch the video and rate this fight!