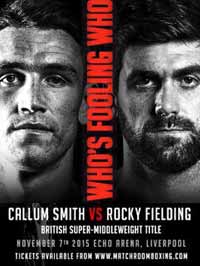 Review by AllTheBestFights.com: 2015-11-07, disappointing fight with too many interruptions: Ricky Burns vs Josh King gets two stars.

The former WBO super-Fw and Lw champion Ricky Burns entered this fight with a pro boxing record of 38-5-1 (12 knockouts) and he is ranked as the No.24 lightweight in the world. He has fought twice in 2015 losing to Omar Figueroa (=Figueroa vs Burns) but then he came back to win against Prince Ofotsu (=Burns vs Ofotsu).
His opponent, Josh King, has an official record of 20-3-0 (9 knockouts) and he suffered his last loss in 2011 when he faced Jack Asis, since then he has won eight consecutive bouts defeating Rogelio Casarez in his last one. Burns vs King is valid for the vacant WBO Inter-Continental lightweight title; undercard of Callum Smith vs Rocky Fielding. Watch the video and rate this fight!