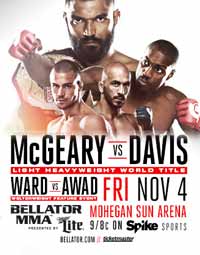 Review by AllTheBestFights.com: 2016-11-04, good finish between Sergei Kharitonov and Javy Ayala: it gets three stars.

Sergei Kharitonov entered this fight with a mma record of 23-5-0 (96% finishing rate) but he is not ranked as he hasn’t fought since July 3, 2015 when he defeated by Kenny Garner (=Kharitonov vs Garner 2).
His opponent, Javy Ayala, has an official record of 9-5-0 (89% finishing rate) and he entered as the No.79 heavyweight in the world. He has fought twice in 2016 losing to Carl Seumanutafa and beating Roy Boughton. Kharitonov vs Ayala is on the undercard of Liam McGeary vs Phil Davis – Bellator 163. Watch the video and rate this fight!