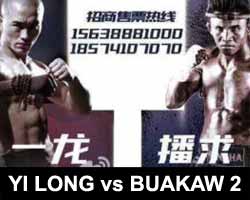 Review by AllTheBestFights.com: 2016-11-05, tough fight but not so exciting: Buakaw Banchamek vs Yi Long 2 gets two stars.

The two time K-1 World MAX champion Buakaw Banchamek, formerly known as Buakaw Por Pramuk, entered this fight with a professional kickboxing record of 269-43-12 (70 knockouts) and he is ranked as the No.7 super welterweight in the world while his opponent, the Shaolin kung-fu fighter Yi Long, should have a record of 49-6-1. Buakaw suffered his last loss in 2015, against Khayal Dzhaniev (4-stars-fight Buakaw vs Dzhaniev), but then he has won five bouts beating Wang Weihao (=Buakaw vs Weihao) and Dylan Salvador in his last two (=Buakaw vs Salvador). In their first fight Buakaw defeated Yi Long by decision (June 6, 2016 Buakaw vs Yi Long I). Buakaw vs Yi Long 2 is the main event of Wu Lin Feng: The Fight of the Century 2 . Watch the video and rate this fight!

Event: Wu Lin Feng: The Fight of the Century 2