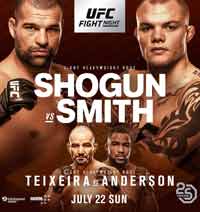 Abu Azaitar entered this fight with a mma record of 13-1-1 (62% finishing rate) but he is not ranked as he hasn’t fought since October 7, 2016 when he defeated Michael Arrant. He suffered his only loss when he faced Marcin Naruszczka in 2012, since then he has collected eight victories and one draw taking revenge on Naruszczka in 2013.
His opponent, Vitor Miranda, has an official record of 12-6-0 (92% finishing rate) and he entered as the No.104 middleweight in the world but he comes off two consecutive losses, with Chris Camozzi in 2016 (Chris Camozzi vs Vitor Miranda) and Marvin Vettori in 2017. Azaitar vs Miranda is on the undercard of Mauricio Shogun Rua vs Anthony Smith – UFC Fight Night 134. Watch the video and rate this fight!

(Free embeddable video hosted on Youtube and not uploaded by AllTheBestFights)
https://www.youtube.com/watch?v=TVVobeW9QvA