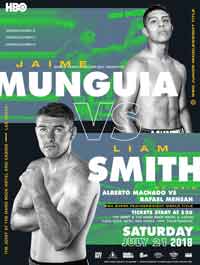 Review by AllTheBestFights.com: 2018-07-21, fight not particularly exciting between Alberto Machado and Rafael Mensah: it gets two stars.

Both undefeated, the Wba super-Fw champion Alberto Machado entered this fight with a perfect boxing record of 19-0-0 (16 KOs=84%) and he is ranked as the No.3 super featherweight in the world (currently the #1 in this division is Miguel Berchelt) while his opponent, Rafael Mensah, has an official record of 31-0-0 (23 knockouts) and he entered as the No.48 in the same weight class. Both boxers fought three times last year: Machado beat Juan Jose Martinez, Carlos Morales (Machado vs Morales) and Jezreel Corrales (Jezreel Corrales vs Alberto Machado) while Mensah won over Fatiou Fassinou, Edward Kambasi and Martin Ahiadekey. Machado vs Mensah is valid for the WBA World super featherweight title (Machado’s first defense); undercard of Jaime Munguia vs Liam Smith. Watch the video and rate this fight!