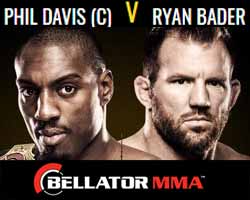 Review by AllTheBestFights.com: 2017-06-24, fight not particularly good between Phil Davis and Ryan Bader 2: it gets two stars.

The Bellator light-Hw champion Phil Davis entered this fight with a pro record of 17-3-0 (47% finishing rate) and he is ranked as the No.3 light heavyweight in the world (currently the #1 in this division is Jon Jones). He lost to Ryan Bader in their first fight in 2015 (=Davis vs Bader) but then he has won four consecutive bouts beating Muhammed ‘King Mo’ Lawal (=Davis vs Lawal) and Liam McGeary in 2016 (=McGeary vs Davis).
His opponent, the Tuf 8 light-Hw tournament winner Ryan Bader, has a mma record of 22-5-0 (55% finishing rate) and he entered as the No.5 in the same weight class. He fought three times last year losing to Anthony Johnson (=Johnson vs Bader) and winning over Ilir Latifi (=Bader vs Latifi) and Antonio Rogerio Nogueira (=Bader vs Nogueira 2). Ryan Bader vs Phil Davis 2 is valid for the Bellator light heavyweight title (Davis’ first defense); undercard of Chael Sonnen vs Wanderlei Silva – Bellator 180. Watch the video and rate this fight!