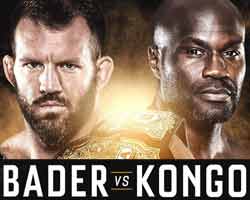 Review by AllTheBestFights.com: 2019-09-07, we hope to see a rematch between Ryan Bader and Cheick Kongo: it gets two stars.

The current Bellator Hw, former light-Hw champion and Tuf 8 tournament winner Ryan Bader entered this fight with a record of 27-5-0 (56% finishing rate) and he is ranked as the No.7 heavyweight in the world (currently the #1 in this division is Stipe Miocic). He suffered his last loss when he faced Anthony Johnson in 2016 (Johnson vs Bader) since then he has won seven fights defeating Matt Mitrione (Ryan Bader vs Matt Mitrione) and Fedor Emelianenko in his last two (Fedor Emelianenko vs Ryan Bader).
His opponent, the black belt in karate and kendo Cheick Kongo, has a mma record of 30-10-2 (60% finishing rate) and he entered as the No.10 in the same weight class. He lost to Muhammed ‘King Mo’ Lawal in 2015 (Lawal vs Kongo) but then he has won eight bouts beating Timothy Johnson (Cheick Kongo vs Timothy Johnson) and Vitaly Minakov in his last two (Vitaly Minakov vs Cheick Kongo 2). Bader vs Kongo, main event of Bellator 226, is valid for the Bellator heavyweight title (Bader’s first defense). Watch the video and rate this fight!

Result: Click here to show the fight’s result
Ryan Bader vs Cheick Kongo (No Contest at 3:52, round 1)