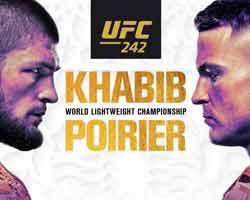 Review by AllTheBestFights.com: 2019-09-07, great fight between Khabib Nurmagomedov and Dustin Poirier: it gets three stars (UFC Performance of the Night).

The undefeated black belt in judo, two time combat sambo world champion and Ufc Lw champ Khabib Nurmagomedov entered this fight with a perfect mma record of 27-0-0 (63% finishing rate) and he is ranked as the No.1 lightweight in the world. In his last three bouts he has won over Edson Barboza (Khabib Nurmagomedov vs Edson Barboza), Al Iaquinta (Khabib Nurmagomedov vs Al Iaquinta) and Conor McGregor (Khabib Nurmagomedov vs Conor McGregor); after this bout Nurmagomedov was suspended for nine months because, following his victory over Conor McGregor, he jumped the cage and charged toward McGregor’s cornerman Dillon Danis, who provoked Khabib with trash talk from outside the cage and then a brawl broke out between the two teams.
His opponent, the black belt in Brazilian jiu-jitsu and interim Ufc Lw champion Dustin Poirier, has an official record of 25-5-0 (76% finishing rate) and he entered as the No.3 in the same weight class. He was defeated by Michael Johnson in 2016 (Poirier vs Johnson) but then he has collected five victories and one no-contest beating Eddie Alvarez (Eddie Alvarez vs Dustin Poirier 2) and Max Holloway in his last two (Max Holloway vs Dustin Poirier 2). Khabib vs Poirier, main event of UFC 242, is valid for the Ufc lightweight title (Khabib’s first defense). Watch the video and rate this fight!