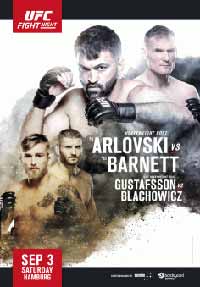 Review by AllTheBestFights.com: 2016-09-03, Ryan Bader vs Ilir Latifi gets three stars thanks to a good finish (UFC Performance of the Night).

The Tuf 8 tournament winner Ryan Bader entered this fight with a mma record of 20-5-0 (50% finishing rate) and he is ranked as the No.5 light heavyweight in the world (currently the #1 in this division is Jon Jones) but he comes off the loss against Anthony Johnson (=Johnson vs Bader).
His opponent, Ilir Latifi, has an official record of 12-4-0 (75% finishing rate) and he entered as the No.18 in the same weight class. He lost to Jan Blachowicz in 2014 (=Latifi vs Blachowicz) but then he has won three consecutive bouts beating Gian Villante in his last one (=Latifi vs Villante). Bader vs Latifi is on the undercard of Andrei Arlovski vs Josh Barnett – UFC Fight Night 93. Watch the video and rate this fight!