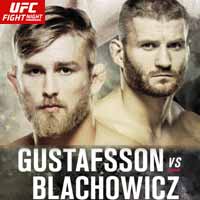 Review by AllTheBestFights.com: 2016-09-03, fight not so exciting between Alexander Gustafsson and Jan Blachowicz: it gets two stars.

Alexander Gustafsson entered this fight with a pro mma record of 16-4-0 (81% finishing rate) and he is ranked as the No.6 light heavyweight in the world (currently the #1 in this division is Jon Jones) but he comes off two consecutive defeats, against Anthony Johnson (=Gustafsson vs Johnson) and Daniel Cormier (via split decision, Cormier vs Gustafsson).
His opponent, the former KSW light-Hw champion Jan Blachowicz, has a record of 19-5-0 (63% finishing rate) and he entered as the No.31 in the same weight class. He lost two consecutive bouts in 2015, with Jimi Manuwa (=Blachowicz vs Manuwa) and Corey Anderson (=Blachowicz vs Anderson), but he came back to win in 2016 against Igor Pokrajac (=Blachowicz vs Pokrajac). Gustafsson vs Blachowicz is on the undercard of Andrei Arlovski vs Josh Barnett – UFC Fight Night 93. Watch the video and rate this fight!