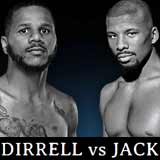 Review by AllTheBestFights.com: 2015-04-24, fight not particularly exciting between Anthony Dirrell and Badou Jack: it gets two stars.

The undefeated Anthony Dirrell entered this fight with a pro boxing record of 27-0-1 (22 KOs=81%) and he is ranked as the No.7 super middleweight in the world (currently the #1 in this division is Carl Froch). The only man who stopped him in a draw was Sakio Bika in 2013 (=Bika vs Dirrell I) but in their second bout Dirrel won clearly via unanimous decision (=Bika vs Dirrell II).
His opponent, Badou Jack, has a record of 18-1-1 (12 knockouts) and he entered as the No.17 in the same weight class. He fought three times last year losing to Derek Edwards but then he came back to win beating Jason Escalera (=Jack vs Escalera) and Francisco Sierra (=Jack vs Sierra). Dirrell vs Jack is valid for the WBC World super middleweight title (Dirrell’s first defense). Watch the video and rate this fight!

Report broken video
« 2015 BOXING fight – Daniel Jacobs vs Caleb Truax – full fight Video WBA
2015 BOXING fight – Artur Szpilka vs Ty Cobb – full fight Video »
HELP US!!! Since the CORONAVIRUS pandemic started, AllTheBestFights.com has struggled to survive! If you have enjoyed this website for the past 10 years, today we ask you for a little help: