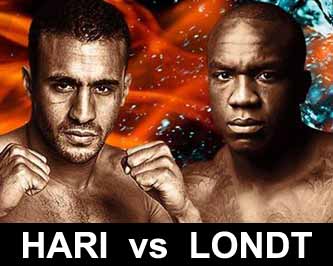 Review by AllTheBestFights.com: 2015-08-22, nice and tough fight between Badr Hari and Ismael Londt: it gets three stars.

The former K-1 champion Badr Hari entered this fight with a professional kickboxing record of 105-12-0 (92 KOs=87%) while his opponent, Ismael Londt, has an official record of 36-6-1 (18 knockouts) and he entered as the No.10 heavyweight in the world. Both fighters suffered their last defeat in 2013 but then they won four consecutive bouts: Hari lost to Zabit Samedov (=Hari vs Samedov 3) and he beat Arnold Oborotov in his last fight (=Hari vs Oborotov) while Londt was defeated by Benjamin Adegbuyi (=Londt vs Adegbuyi) and he won over Rustemi Kreshnik in his last one. Hari vs Londt is the main event of Akhmat Fight Show – Grozny Battle 6. Watch the video and rate this fight!