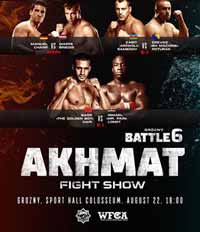 Review by AllTheBestFights.com: 2015-08-22, fight not particularly good between Zabit Samedov and Dzevad Poturak: it gets two stars.

Zabit Samedov entered this fight with a kickboxing record of 74-9-1 (35 knockouts) and he is ranked as the No.8 heavyweight in the world while his opponent, Dzevad Poturak, has an official record of 52-23-1 (31 knockouts). In their last bout Samedov defeated Danyo Ilunga (=Samedov vs Ilunga) while Poturak beat Frank Munoz. Samedov vs Poturak is on the undercard of Badr Hari vs Ismael Londt. Watch the video and rate this fight!