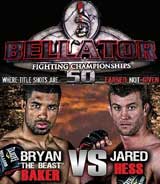 Review: 2011-09-17, nice fight between Bryan Baker and Jared Hess (Bellator 50). Baker defeated Jared Hess by TKO in the third round. Baker vs Hess is one of the quarterfinal of the Bellator Middleweight Tournament. Watch the video!

Other fights on the card:
Brian Rogers vs Victor O’Donnell
Alexander Shlemenko vs Zelg Galesic
Vitor Vianna vs Sam Alvey