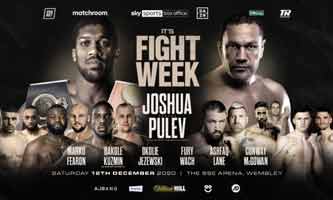 Review by AllTheBestFights.com: 2020-12-12, pretty good fight between Martin Bakole and Sergey Kuzmin: it gets three stars (take a look at our ranking of the best boxing fights of 2020).
Martin Bakole Ilunga entered this fight with a professional record of 15-1-0 (12 KOs=80%) and he is ranked as the No.20 heavyweight in the world. He suffered his only loss when he faced Michael Hunter in 2018, since then he has won four bouts defeating Mariusz Wach (Mariusz Wach vs Martin Bakole Ilunga), Ytalo Perea, Kevin Johnson and Rodney Hernandez.
His opponent, Sergey Kuzmin, has a boxing record of 15-1-0 (11 knockouts) and he entered as the No.27 in the same weight class. He fought twice last year beating Joey Dawejko and losing to Michael Hunter (Michael Hunter vs Sergey Kuzmin). Kuzmin vs Bakole is valid for the vacant WBC International heavyweight title; undercard of Anthony Joshua vs Kubrat Pulev. Watch the video and rate this fight!