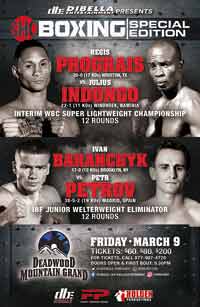 The undefeated Ivan Baranchyk entered this fight with a perfect boxing record of 17-0-0 (10 knockouts) and he is ranked as the No.38 super lightweight in the world. He fought twice last year winning over Abel Ramos (4-stars fight Ivan Baranchyk vs Abel Ramos) and Keenan Smith.
His opponent, Petr Petrov (who replaces Anthony Yigit), has a record of 38-5-2 (19 knockouts) and he entered as the No.21 in the same weight class but he comes off the loss against Terry Flanagan (Terry Flanagan vs Petr Petrov). Before this bout, in 2016, he had beat Marvin Quintero (Marvin Quintero vs Petr Petrov) and Michael Perez (Petr Petrov vs Michael Perez). Baranchyk vs Petrov, Ibf light welterweight eliminator, is on the undercard of Julius Indongo vs Regis Prograis. Watch the video and rate this fight!