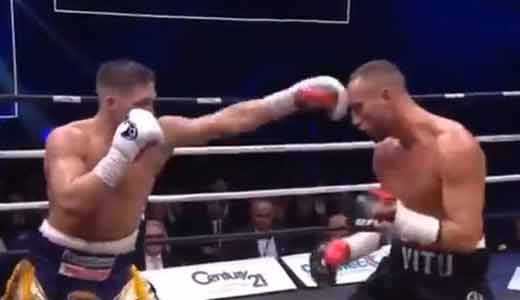 Review by AllTheBestFights.com: 2018-03-10, high pace with some tough exchanges thanks to a great performance by both boxers: Brian Castano vs Cedric Vitu is the best boxing fight of 2018 so far and it gets four stars!

The undefeated Wba light-Mw champion Brian Carlos Castano entered this fight with a perfect record of 14-0-0 (10 knockouts) and he is ranked as the No.14 super welterweight in the world. Between 2016 and 2017 he beat Marcus Upshaw, Emmanuel de Jesus and Michel Soro (Michel Soro vs Brian Carlos Castano).
His opponent, Cedric Vitu, has an official record of 46-2-0 (19 knockouts) and he entered as the No.15 in the same weight class. He suffered his last loss when he faced Siarhei Rabchanka in 2012, since then he has won eleven consecutive bouts beating Isaac Real (Cedric Vitu vs Isaac Real) and Marcello Matano in 2017. Castano vs Vitu is valid for the WBA World super welterweight title (Castano’s first defense). Watch the video and rate this fight!

(Free embeddable video hosted on Youtube and not uploaded by AllTheBestFights)
https://www.youtube.com/watch?v=KiGSPsUaqQY