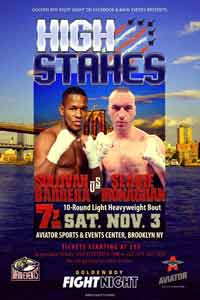 Review by AllTheBestFights.com: 2018-11-03, good performance by both boxers: Sullivan Barrera vs Sean Monaghan gets three stars.

Sullivan Barrera entered this fight with a professional record of 21-2-0 (14 knockouts) and he is ranked as the No.11 light heavyweight in the world but he comes off the loss against Dmitry Bivol (Dmitry Bivol vs Sullivan Barrera); before this bout, in 2017, he had defeated Paul Parker (Barrera vs Parker), Joe Smith Jr (Smith Jr vs Barrera) and Felix Valera (Sullivan Barrera vs Felix Valera).
His opponent, Sean Monaghan, has a boxing record of 29-1-0 (17 knockouts) and he entered as the No.26 in the same weight class. He suffered his only loss when he faced Marcus Browne last year (Marcus Browne vs Sean Monaghan), after this fight he has beat Evert Bravo. Barrera vs Monaghan is the main event of the evening. Watch the video and rate this fight!

(Alternative free embeddable video hosted on Youtube and not uploaded by AllTheBestFights)
https://www.youtube.com/watch?v=67mMjHn_86M