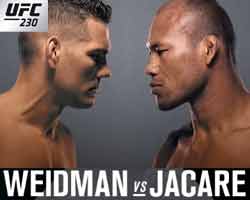 Review by AllTheBestFights.com: 2018-11-03, Chris Weidman vs Ronaldo Jacare Souza gets three stars thanks to a good finsih (UFC Fight of the Night).

The black belt in Brazilian jiu-jitsu and former Ufc Mw champion Chris Weidman entered this fight with a pro mma record of 14-3-0 (71% finishing rate) but he is not ranked as he hasn’t fought since July 27, 2017 when he defeated Kelvin Gastelum (Chris Weidman vs Kelvin Gastelum). Before this bout Weidman had lost three consecutive fights: against Luke Rockhold (Weidman vs Rockhold), Yoel Romero Palacio (Weidman vs Romero) and Gegard Mousasi (Weidman vs Mousasi).
His opponent, the black belt in Bjj, judo and former Strikeforce Mw champion Ronaldo Jacare Souza, has a record of 25-6-0 (84% finishing rate) and he entered as the No.7 middleweight in the world (currently the #1 in this division is Robert Whittaker). He has fought twice in 2018 beating Derek Brunson (Ronaldo Jacare Souza vs Derek Brunson 2) and losing to Kelvin Gastelum (Kelvin Gastelum vs Ronaldo Jacare Souza). Weidman vs Jacare is on the undercard of Daniel Cormier vs Derrick Lewis – UFC 230. Watch the video and rate this fight!

(Free embeddable video hosted on Youtube/Facebook and not uploaded by AllTheBestFights)
https://www.youtube.com/watch?v=td_B6mjC2bQ