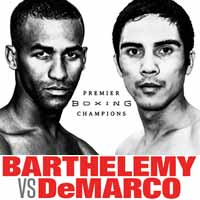 Review by AllTheBestFights.com: 2015-06-21, pretty good fight between Rances Barthelemy and Antonio DeMarco: it gets three stars.

The undefeated Rances Barthelemy entered this fight with a perfect boxing record of 22-0-0 (13 knockouts) and he is ranked as the No.9 super lightweight in the world (currently the #1 in this division is Terence Crawford). He won the IBF super-Fw title last year when he faced Argenis Mendez in their rematch (=Mendez vs Barthelemy 2) and after this bout he defeated Fernando David Saucedo (=Barthelemy vs Saucedo) and Angino Perez (=Barthelemy vs Perez).
His opponent, the former Wbc lightweight champion Antonio DeMarco, has an official record of 31-4-1 (23 knockouts) and he entered as the No.18 in the same weight class. He fought three times in 2014 beating Jesus Gurrola (=DeMarco vs Gurrola) and Lanardo Tyner, but then he lost to Jessie Vargas in a bout valid for the Wba super-Lw belt (=Vargas vs DeMarco). Barthelemy vs DeMarco is the main event of the evening. Watch the video and rate this fight!