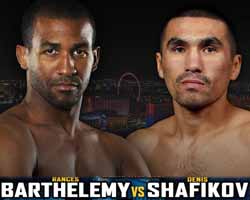 Review by AllTheBestFights.com: 2015-12-18, great performance by both boxers: Rances Barthelemy vs Denis Shafikov gets three stars.

The former Ibf super-Fw champion Rances Barthelemy entered this fight with a perfect record of 23-0-0 (13 knockouts) and he is ranked as the No.5 super lightweight in the world (currently the #1 in this division is Terence Crawford). He has fought twice in 2015 winning over Angino Perez (=Barthelemy vs Perez) and Antonio DeMarco (=Barthelemy vs DeMarco).
His opponent, Denis Shafikov, has an official boxing record of 36-1-1 (19 knockouts) and he entered as the No.3 lightweight. He suffered his only loss last year when he faced Miguel Vazquez, after this bout he has won three consecutive fights beating Roy Mukhlis in his last one (=Shafikov vs Mukhlis). Barthelemy vs Shafikov is valid for the vacant IBF World lightweight title. Watch the video and rate this fight!