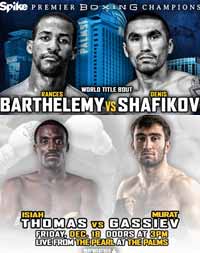 Review by AllTheBestFights.com: 2015-12-18, disappointing finish between Murat Gassiev and Isiah Thomas: we want to see a rematch.

Both undefeated, the Russian Murat Gassiev entered this fight with a perfect boxing record of 22-0-0 (16 KOs=73%) and he is ranked as the No.19 cruiserweight in the world while his opponent, the American Isiah Thomas, has an official record of 15-0-0 (6 knockouts) and he entered as the No.46 in the same weight class. Gassiev has already fought three times in 2015 beating Rodney Moore in his last bout while Thomas has fought twice winning over Brad Austin and Jordan Shimmell. Gassiev vs Thomas is on the undercard of Rances Barthelemy vs Denis Shafikov. Watch the video and rate this fight!

Result: Click here to show the fight’s result
Murat Gassiev vs Isiah Thomas (No-contest at 3:00, round 3)