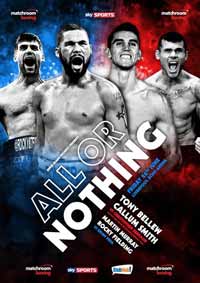 Review by AllTheBestFights.com: 2015-06-26, something good in the last part of the bout but the rest of the fight was pretty boring: Tony Bellew vs Ivica Bacurin gets two stars.

Tony Bellew entered this fight with a professional boxing record of 23-2-1 (14 knockouts) and he is ranked as the No.9 cruiserweight in the world (currently the #1 in this division is Grigory Drozd). He suffered his last defeat in 2013 when he faced Adonis Stevenson (in a bout valid for the light-Hw title, Stevenson vs Bellew), after this fight he moved down to the cruiserweight division winning three bouts, the last one against Nathan Cleverly (=Cleverly vs Bellew 2).
His opponent, Ivica Bacurin, has an official record of 22-7-1 (12 knockouts) and he entered as the No.60 in the same weight class. He lost to Francesco Pianeta in 2014 but then he has won four consecutive fights, the last one against Robert Brajkovic. Bellew vs Bacurin is on the undercard of Callum Smith vs Christopher Rebrasse. Watch the video and rate this fight!