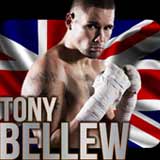 Review: 2014-07-12, Tony Bellew vs Julio Cesar Dos Santos gets three stars only thanks to a good finish. Tony Bellew entered this fight with a professional boxing record of 21-2-1 (13 knockouts) and he is ranked as the No.11 cruiserweight in the world, he suffered his second defeat last year when he faced Adonis Stevenson in a fight valid for the WBC light-Hw title (=Stevenson vs Bellew); after that bout he has fought once in 2014 beating Valery Brudov (=Bellew vs rudov).
His opponent, Julio Cesar Dos Santos, has an official record of 26-2-0 (23 KOs=88%) and he entered as the No.52 in the same weight class, he also lost his second bout in 2013, against Dmytro Kucher, since then he has won four consecutive times. Bellew vs Dos Santos is valid for the WBO International cruiserweight title. Watch the video and rate this fight!