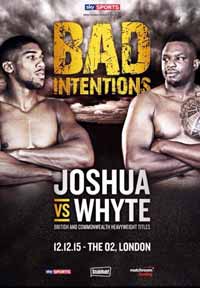 Review by AllTheBestFights.com: 2015-12-12, disappointing fight between Tony Bellew and Mateusz Masternak: it gets two stars.

Tony Bellew entered this fight with a record of 25-2-1 (16 knockouts) and he is ranked as the No.8 cruiserweight in the world (currently the #1 in this division is Grigory Drozd). He suffered his last loss in 2013 when he faced Adonis Stevenson (=Stevenson vs Bellew), since then he has collected five consecutive victories.
His opponent, Mateusz Masternak, has an official boxing record of 36-3-0 (26 knockouts) and he entered as the No.26 in the same weight class. He has already fought three times in 2015 defeating Ruben Angel Mino (=Masternak vs Mino) and Carlos Ailton Nascimento (=Masternak vs Nascimento) but between these two bouts he lost to Johnny Muller. ‘Bomber’ Bellew vs Masternak is valid for the vacant EBU (European) cruiserweight title; undercard of Anthony Joshua vs Dillian Whyte. Watch the video and rate this fight!