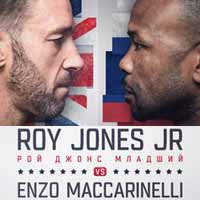 The former world champion in four different weight classes Roy Jones Jr (46 years old, 11 more than Maccarinelli) entered this fight with a pro boxing record of 62-8-0 (45 knockouts) and he is ranked as the No.61 cruiserweight in the world. He suffered three consecutive losses between 2009 and 2011, the last one against Denis Lebedev (=Lebedev vs Jones Jr), but since then he has won eight bouts beating Eric Watkins in August (=Jones Jr vs Watkins).
His opponent, the former Wbo Cw champion Enzo Maccarinelli, has a record of 40-7-0 (32 KOs=80%) and he entered as the No.54 in the same weight class. He lost to Juergen Braehmer last year (=Braehmer vs Maccarinelli), but then he came back to win in 2015 defeating Gyorgy Novak and Jiri Svacina. Jones vs Maccarinelli is the main event of the evening. Watch the video and rate this fight!