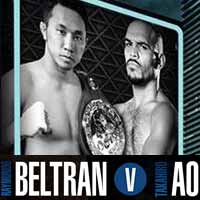 Review by AllTheBestFights.com: 2015-05-01, pretty good finish between Raymundo Beltran and Takahiro Ao: it gets three stars.

Raymundo Beltran entered this fight with a professional boxing record of 29-7-1 (17 knockouts) and he is ranked as the No.9 super lightweight in the world. He fought twice last year beating Arash Usmanee (=Beltran vs Usmanee) but then he lost to #1 Terence Crawford (=Crawford vs Beltran).
His opponent, the former Wbc Fw and super-fw champion Takahiro Ao, has an official record of 27-3-1 (12 knockouts) and he entered as the No.20 lightweight. He suffered his last defeat in 2012 when he faced Gamaliel Diaz, since then he has won four bouts beating Juan Carlos Salgado in his last fight. Beltran vs Ao is valid for the vacant WBO World lightweight title (title on the line for Ao only because Beltran missed weight). Watch the video and rate this fight!

Video:
(Free embeddable video hosted on Youtube and not uploaded by AllTheBestFights, to report it please visit this link where the video is hosted)