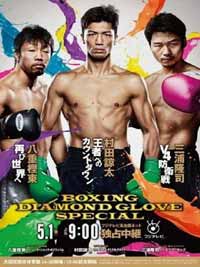 Review by AllTheBestFights.com: 2015-05-01, Takashi Miura vs Billy Dib gets three stars thanks to a good finish.

Takashi Miura entered this fight with a boxing record of 28-2-2 (21 KOs=75%) and he is ranked as the No.2 super featherweight in the world. The last time he lost was in 2011 when he faced #1 super-Fw Takashi Uchiyama; since then he has won eight consecutive bouts winning the Wbc world title in 2013 against Gamaliel Diaz and successfully defending it three times.
His opponent, the former Ibf Fw champion Billy Dib, has an official record of 39-3-0 (23 knockouts) and he entered as the No.20 in the same weight class. He lost to Evgeny Gradovich in 2013 (=Gradovich vs Dib 2) but then he came back to win beating Alberto Garza, Ruben Manakane and Isaias Santos Sampaio. Miura vs Dib is valid for the WBC World super featherweight title (Miura’s fourth defense). Watch the video and rate this fight!