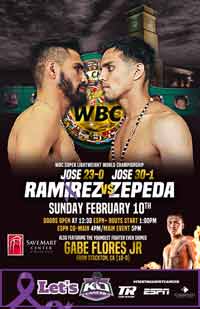 Review by AllTheBestFights.com: 2019-02-10, good performance by both boxers: Raymundo Beltran vs Hiroki Okada gets three stars.

The former Wbo Lw champion Raymundo Beltran entered this fight with a pro boxing record of 35-8-1 (21 knockouts) and he is ranked as the No.13 lightweight in the world but he comes off the loss against Jose Pedraza (Raymundo Beltran vs Jose Pedraza); before this bout he had beat Paulus Moses (Raymundo Beltran vs Paulus Moses).
His opponent, the undefeated Hiroki Okada, has a perfect record of 19-0-0 (13 knockouts) and he entered as the No.21 super lightweight. In his last three fights he has won over Jason Pagara, Ciso Morales and Cristian Rafael Coria. Beltran vs Okada is on the undercard of Jose Carlos Ramirez vs Jose Zepeda. Watch the video and rate this fight!