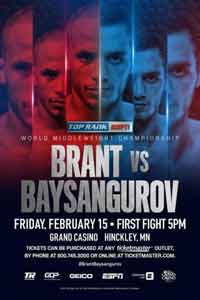 Review by AllTheBestFights.com: 2019-02-15, nice and tough exchanges between Joshua Greer Jr and Giovanni Escaner: it gets three stars.

Joshua Greer Jr entered this fight with a pro boxing record of 19-1-1 (11 knockouts) and he is ranked as the No.18 bantamweight in the world. He suffered his only loss when he faced Stephen Fulton in 2015 (via majority decision), since then he has won 16 consecutive bouts defeating Giovanni Delgado and Daniel Lozano in his last two.
His opponent, Giovanni Escaner, has a record of 19-3-0 (12 knockouts) and he entered as the No.35 in the same weight class. He was defeated by Jason Canoy in 2014 but then he has collected eight victories beating Rene Dacquel in his last one. Greer vs Escaner is valid for the WBC Continental Americas bantamweight title; undercard of Rob Brant vs Khasan Baysangurov. Watch the video and rate this fight!