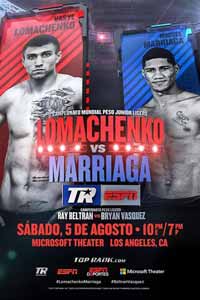 Raymundo Beltran entered this fight with a pro boxing record of 33-7-1 (21 knockouts) and he is ranked as the No.8 lightweight in the world (currently the #1 in this division is Robert Easter Jr). He suffered his last loss when he faced Terence Crawford in 2014 (=Crawford vs Beltran), since then he has collected one no-contest and four victories over Ivan Najera, Miguel Angel Mendoza, Mason Menard and Jonathan Maicelo (4-stars fight, Beltran vs Maicelo).
His opponent, Bryan Vasquez, has a record of 35-2-0 (19 knockouts) but he is not ranked as he hasn’t fought since July 2, 2016 when he defeated Angel Granados. Before this bout he had lost to Javier Fortuna (=Vasquez vs Fortuna). Raymundo Beltran vs Bryan Vasquez is valid for the NABF and WBO NABO lightweight titles; undercard of Vasyl Lomachenko vs Miguel Marriaga. Watch the video and rate this fight!