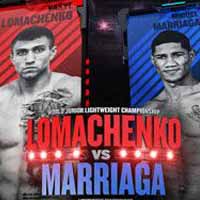 Review by AllTheBestFights.com: 2017-08-05, one sided fight between Vasyl Lomachenko and Miguel Marriaga: it gets two stars.

The 2012 and 2008 Olympic Gold Medalist and world champion in two different weight classes Vasyl Lomachenko entered this fight with a professional boxing record of 8-1-0 (6 KOs=75%) and he is ranked as the No.1 super featherweight in the world. He lost to Orlando Salido at his second professional bout in 2014 (via split decision, Salido vs Lomachenko), but then he has won the vacant Wbo Fw title against Gary Russell Jr in 2014 (=Lomachenko vs Russell Jr) and the Wbo super-Fw belt against Roman Martinez in 2016 (4-stars fight, Martinez vs Lomachenko); after this bout ‘Hi-Tech’ Lomachenko defended his title twice, with Nicholas Walters (=Lomachenko vs Walters) and Jason Sosa (=Lomachenko vs Sosa).
His opponent, Miguel Marriaga, has an official record of 25-2-0 (21 KOs=84%) and he entered as the No.29 featherweight. He won over Adones Aguelo, Guy Robb and Eduardo Montoya in 2016 but he lost to Oscar Valdez in 2017 (4-stars fight, Valdez vs Marriaga). Vasyl Lomachenko vs Miguel Marriaga is valid for the WBO World super featherweight title. Watch the video and rate this fight!