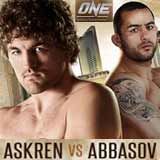 Review: 2014-05-30, good fight between Ben Askren and Bakhtiyar Abbasov: it gets three stars. The undefeated Ben Askren entered this fight with a perfect record of 12-0-0 (50% finishing rate) and he is ranked as the No.8 welterweight in the world, he fought twice in 2013 successfully defending the Bellator Ww title against Karl Amoussou in January (=Askren vs Amoussou) and Andrey Koreshkov in July (=Askren vs Koreshkov); then on November Bellator released Askren and on December he signed a 2 year (6 fights) contract with ONE Fighting Championship.
His opponent, the combat sambo world champion Bakhtiyar Abbasov, has an official record of 11-2-0 (91% finishing rate), he suffered his last defeat in 2011 when he faced Igor Sliusarchuk at ProFc 13, since then he has won nine consecutive fights. Askren vs Abbasov is the main event of “ONE FC 16: Honor and Glory”. Watch the video and rate this fight!