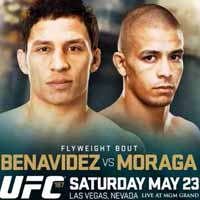 Review by AllTheBestFights.com: 2015-05-23, fight not particularly good between Joseph Benavidez and John Moraga: it gets two stars.

Joseph Benavidez entered this fight with a pro mma record of 21-4-0 (71% finishing rate) and he is ranked as the No.2 flyweight in the world. He suffered his last defeat in 2013 when he faced #1 Ufc Flw champion Demetrious Johnson (=Johnson vs Benavidez 2), after this bout he has beat Tim Elliott (=Benavidez vs Elliott) and Dustin Ortiz (=Benavidez vs Ortiz).
His opponent, John Moraga, has a record of 16-3-0 (62% finishing rate) and he entered as the No.10 in the same weight class. He lost to John Dodson last year (=Dodson vs Moraga 2) but then he has defeated Justin Scoggins and Willie Gates. Benavidez vs Moraga is on the undercard of Anthony Johnson vs Daniel Cormier – UFC 187. Watch the video and rate this fight!