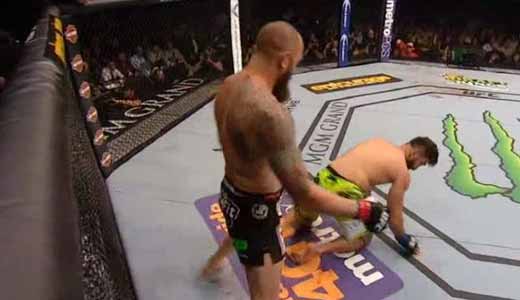 Review by AllTheBestFights.com: 2015-05-23, back and forth fight with some wild exchanges: Andrei Arlovski vs Travis Browne is one of the best mma fights of 2015 and it gets four stars (UFC Fight of the Night).

The former Ufc Hw champion Andrei Arlovski entered this fight with a mma record of 23-10-0 (83% finishing rate) and he is ranked as the No.3 heavyweight in the world (currently the #1 in this division is Cain Velasquez). He suffered his last loss in 2013 when he faced Anthony Johnson (=Arlovski vs Johnson), since then he has won four bouts beating Brendan Schaub (=Schaub vs Arlovski) and Antonio ‘Bigfoot’ Silva in 2014 (=Silva vs Arlovski 2).
His opponent, Travis Browne, has an official record of 17-2-1 (88% finishing rate) and he entered as the No.5 in the same weight class. He also fought twice last year losing to Fabricio Werdum (=Werdum vs Browne) but then he came back to win against Brendan Schaub (=Browne vs Schaub). ‘The Pit Bull’ Arlovski vs Browne is on the undercard of Anthony Johnson vs Daniel Cormier – UFC 187. Watch the video and rate this fight!