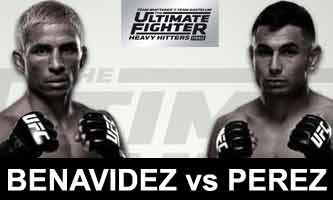 Review by AllTheBestFights.com: 2018-11-30, pretty good fight between Joseph Benavidez and Alex Perez: it gets three stars (UFC Performances of the Night).

Joseph Benavidez entered this fight with a pro record of 25-5-0 (60% finishing rate) and he is ranked as the No.5 flyweight in the world but he comes off the loss against Sergio Pettis (Joseph Benavidez vs Sergio Pettis); before this bout, in 2016, he had beat Zach Makovsky in February (Benavidez vs Makovsky) and current #1 Ufc Flw champion Henry Cejudo in December (Joseph Benavidez vs Henry Cejudo).
His opponent, Alex Perez, has an official mma record of 21-4-0 (48% finishing rate) and he entered as the No.11 in the same weight class. He suffered two consecutive losses between 2015 and 2016, against Adam Antolin and Jared Papazian, but since then he has won eight fights defeating Eric Shelton and Jose Torres in 2018. Benavidez vs Perez is on the undercard of Rafael dos Anjos vs Kamaru Usman – UFC Tuf 28 Finale. Watch the video and rate this fight!