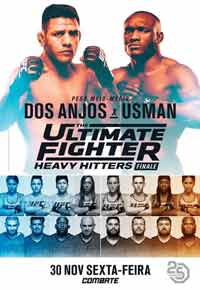 Review by AllTheBestFights.com: 2018-11-30, good fight between Juan Espino and Justin Frazier: it gets three stars (UFC Performances of the Night).

Juan Francisco Espino Dieppa entered this fight with a pro mma record of 8-1-0 (75% finishing rate) and he is ranked as the No.76 heavyweight in the world. He suffered his only loss when he faced Vitaly Minakov in 2011, since then he has won six consecutive bouts defeating Martin Buday in his last one.
His opponent, Justin Frazier, has a record of 10-2-0 (100% finishing rate) and he entered as the No.122 in the same weight class. He lost to Mike Wessel in 2014 but then he has won over Carlton Little Sr, Parnell Davis and Reggie Cato. Juan Espino vs Frazier is the final of The Ultimate Fighter 28 Heavyweight tournament; undercard of Rafael dos Anjos vs Kamaru Usman – UFC Tuf 28 Finale. Watch the video and rate this fight!