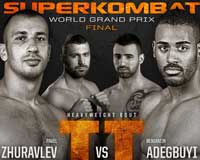 Review: 2013-12-21, tough fight with three knockdowns: the second fight between Benjamin Adegbuyi and Pavel Zhuravlev gets three stars. Benjamin Adegbuyi (18-2-1) entered as the No.10 heavyweight in the world while Pavel Zhuravlev (62-9-1) entered as the No.7 super cruiserweight. In their first fight Zhuravlev defeated Adegbuyi by ko (December 22, 2012); this second fight is the main event of SuperKombat WGP 2013 Final. Watch the video!