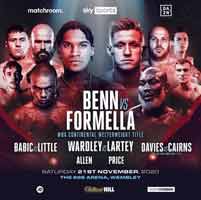 Review by AllTheBestFights.com: 2020-11-21, good fight between Sebastian Formella and Conor Benn: it gets three stars.
The former Ibo Ww champion Sebastian Formella entered this fight with a pro boxing record of 22-1-0 (10 knockouts) and he is ranked as the No.27 welterweight in the world but he comes off his first loss, suffered against Shawn Porter in August (Shawn Porter vs Sebastian Formella); before this bout, between 2019 and 2020, he had beat Thulani Mbenge (Thulani Mbenge vs Sebastian Formella) and Roberto Arriaza (Sebastian Formella vs Roberto Arriaza).
His opponent, the undefeated Conor Benn, has a perfect record of 16-0-0 (11 knockouts) and he entered as the No.59 in the same weight class. In his last three fights he has won over Josef Zahradnik, Jussi Koivula and Steve Jamoye. Benn vs Formella is valid for the WBA Continental welterweight title. Watch the video and rate this fight!