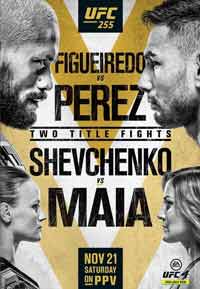 Review by AllTheBestFights.com: 2020-11-21, Mike Perry vs Tim Means gets three stars thanks to a good second part of the fight.
Mike Perry entered this fight with a pro record of 14-6-0 (79% ko/tko victory rate – he has never won via submission) and he is ranked as the No.27 welterweight in the world. He lost two consecutive bouts last year, against Vicente Luque (Mike Perry vs Vicente Luque) and Geoff Neal, but he came back to win with Mickey Gall in June 2020 (Mike Perry vs Mickey Gall).
His opponent, Tim Means, has an official mma record of 30-12-1 (80% finishing rate) and he entered as the No.61 in the same weight class. He has already fought twice in 2020 losing to Daniel Rodriguez and beating Laureano Staropoli. Means vs Perry is on the undercard of Deiveson Figueiredo vs Alex Perez – UFC 255. Watch the video and rate this fight!