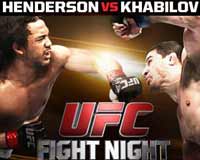 Review: 2014-06-07, high level of technique by both fighters and good finish: Benson Henderson vs Rustam Khabilov gets three stars (UFC Performance of the Night). The black belt in taekwondo and Bjj Benson Henderson entered this fight with a professional mma record of 20-3-0 (50% finishing rate) and he is ranked as the No.2 lightweight in the world (currently the #1 in this division is Anthony Pettis), last year he lost the Ufc Lw title when he faced Anthony Pettis in their rematch (Ben’s fourth title defense, Henderson vs Pettis 2); Bendo came back to victory in 2014 defeating Josh Thomson (via split decision Henderson vs Thomson).
His opponent, the 2007 Combat Sambo world champion Rustam Khabilov, has an official record of 17-1-0 (53% finishing rate) and he entered as the No.19 in the same weight class, he suffered his only defeat (via split decision) in 2011 when he faced Ruslan Khaskhanov, since then he has fought and won six times. In 2013 Khabilov defeated Yancy Medeiros and Jorge Masvidal (=Masvidal vs Khabilov). Henderson vs Khabilov is the main event of UFC Fight Night ABQ (Albuquerque). Watch the video and rate this fight!