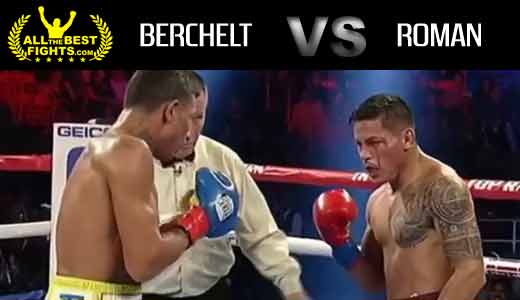 Review by AllTheBestFights.com: 2018-11-03, amazing mexican war in which both boxers showed big heart and granite chin: this is the action we want for a boxing Fight of the Year 2018 candidate, Miguel Berchelt vs Miguel Roman gets five stars!

The Wbc super-Fw and former interim Wbo champion Miguel Berchelt entered this fight with a pro record of 34-1-0 (30 KOs=88%) and he is ranked as the No.1 super featherweight in the world. ‘El Alacran’ Berchelt suffered his only loss when he faced Luis Eduardo Florez in 2014, since then he has won 13 consecutive bouts beating Takashi Miura (Miguel Berchelt vs Takashi Miura), Maxwell Awuku (Miguel Berchelt vs Maxwell Awuku) and Jonathan Victor Barros in his last three (Miguel Berchelt vs Jonathan Victor Barros).
His opponent, Miguel Roman, has an official boxing record of 60-12-0 (47 KOs=78%) and he entered as the No.4 in the same weight class. Mickey Roman lost to Takashi Miura last year (Roman vs Miura) but then he has won four bouts defeating Aristides Perez (Miguel Roman vs Aristides Perez) and Michel Marcano in 2018 (Miguel Roman vs Michel Marcano). Berchelt vs Roman is valid for the WBC World super featherweight title (Berchelt’s fourth defense). Watch the video and rate this fight!

We are modifying this website to offer you the best possible user experience, we hope you enjoy it! HELP US!!! Since the COVID-19 pandemic started, AllTheBestFights.com has struggled to survive! If you have enjoyed this website for the past 10 years, today we ask you for a little help: