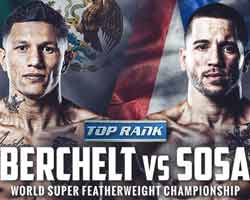 Review by AllTheBestFights.com: 2019-11-02, pretty good fight between Miguel Berchelt and Jason Sosa: it gets two stars.

The Wbc super-Fw and former interim Wbo champion Miguel Berchelt entered this fight with a record of 36-1-0 (32 KOs=89%) and he is ranked as the No.1 super featherweight in the world. ‘El Alacran’ Berchelt suffered his only loss when he faced Luis Eduardo Florez in 2014, since then he has won 15 consecutive bouts beating Jonathan Victor Barros (Miguel Berchelt vs Jonathan Victor Barros), Miguel Roman (2018 Fight of the Year candidate, Miguel Berchelt vs Miguel Roman) and Francisco Vargas in his last three (4-stars fight, Miguel Berchelt vs Francisco Vargas 2).
His opponent, the former Wba super-Fw champ Jason Sosa, has a boxing record of 23-3-4 (16 knockouts) and he entered as the No.12 in the same weight class. He lost two consecutive bouts in 2017, against Vasyl Lomachenko (Lomachenko vs Sosa) and Yuriorkis Gamboa (controversial majority decision, Jason Sosa vs Yuriorkis Gamboa) but then he has beat Reynaldo Blanco, Moises Delgadillo and Haskell Lydell Rhodes (Jason Sosa vs Haskell Lydell Rhodes). Berchelt vs Sosa is valid for the WBC World super featherweight title (Berchelt’s sixth defense). Watch the video and rate this fight!