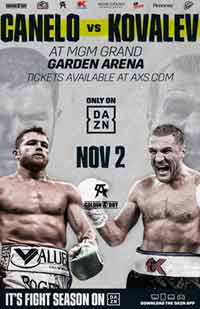 Review by AllTheBestFights.com: 2019-11-02, good exchanges between Ryan Garcia and Romero Duno: it gets three stars.

The undefeated 21-year-old Ryan Garcia entered this fight with a perfect record of 18-0-0 (15 KOs=83%) and he is ranked as the No.16 lightweight in the world. In his last three fights he has won over Carlos Morales (Ryan Garcia vs Carlos Morales), Braulio Rodriguez (Ryan Garcia vs Braulio Rodriguez) and Jose Lopez (Ryan Garcia vs Jose Lopez).
His opponent, Romero Duno, has a boxing record of 21-1-0 (16 KOs=76%) and he entered as the No.37 in the same weight class. He suffered his only loss when he faced Mikhail Alexeev in 2016, since then he has won 12 consecutive bouts defeating Ivan Delgado in his last one. Garcia vs Duno is valid for the vacant WBC Silver and WBO NABO lightweight titles; undercard of Saul Canelo Alvarez vs Sergey Kovalev. Watch the video and rate this fight!