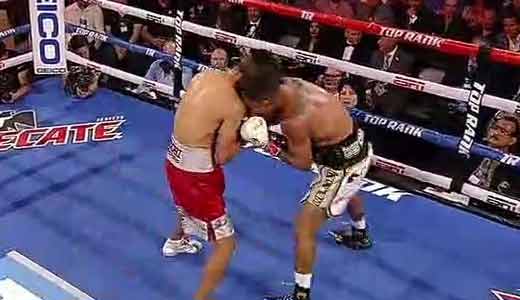 Review by AllTheBestFights.com: 2019-05-11, another “classic” boxing fight between these two mexican warriors: Miguel Berchelt vs Francisco Vargas 2 is one of the best boxing fights of the year 2019 and it gets four stars!

The Wbc super-Fw and former interim Wbo champion Miguel Berchelt entered this fight with a professional record of 35-1-0 (31 KOs=89%) and he is ranked as the No.1 super featherweight in the world. ‘El Alacran’ Berchelt suffered his only loss when he faced Luis Eduardo Florez in 2014, since then he has won 14 consecutive bouts beating Maxwell Awuku (Miguel Berchelt vs Maxwell Awuku), Jonathan Victor Barros (Miguel Berchelt vs Jonathan Victor Barros) and Miguel Roman in his last three (2018 Fight of the Year candidate, Miguel Berchelt vs Miguel Roman).
His opponent, the former Olympian and former Wbc super-Fw champ Francisco Vargas, has a boxing record of 25-1-2 (18 knockouts) but he is not ranked as he hasn’t fought since April 12, 2018 when he defeated Rod Salka (Francisco Vargas vs Rod Salka). Before this fight, in 2017, he had beat Stephen Smith in December (Francisco Vargas vs Stephen Smith) but he had also lost the first bout with Miguel Berchelt in January (4-stars fight, Vargas vs Berchelt I). Berchelt vs Vargas 2 is valid for the WBC World super featherweight title (Berchelt’s fifth defense). Watch the video and rate this fight!