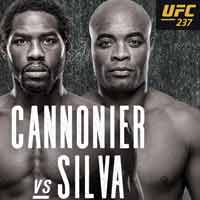 Review by AllTheBestFights.com: 2019-05-11, some good single shots between Anderson Silva and Jared Cannonier but it is not enough to get three stars: it gets two.

The 44-year-old (9 years older than Cannonier) black belt in Bjj, tae-kwon-do and former Ufc Mw champion Anderson Silva entered this fight with a pro mma record of 34-9-0 (76% finishing rate) and he is ranked as the No.15 middleweight in the world but he won just one out of his last four bouts, against Derek Brunson in 2017 (Anderson Silva vs Derek Brunson), after this fight he has lost to Israel Adesanya in February 2019 (Israel Adesanya vs Anderson Silva).
His opponent, Jared Cannonier, has a record of 11-4-0 (82% finishing rate) and he entered as the No.13 in the same weight class. He lost two consecutive bouts between 2017 and 2018, against Jan Blachowicz and Dominick Reyes (Dominick Reyes vs Jared Cannonier), but then he has beat David Branch (David Branch vs Jared Cannonier). Silva vs Cannonier is on the undercard of Rose Namajunas vs Jessica Andrade – UFC 237. Watch the video and rate this fight!